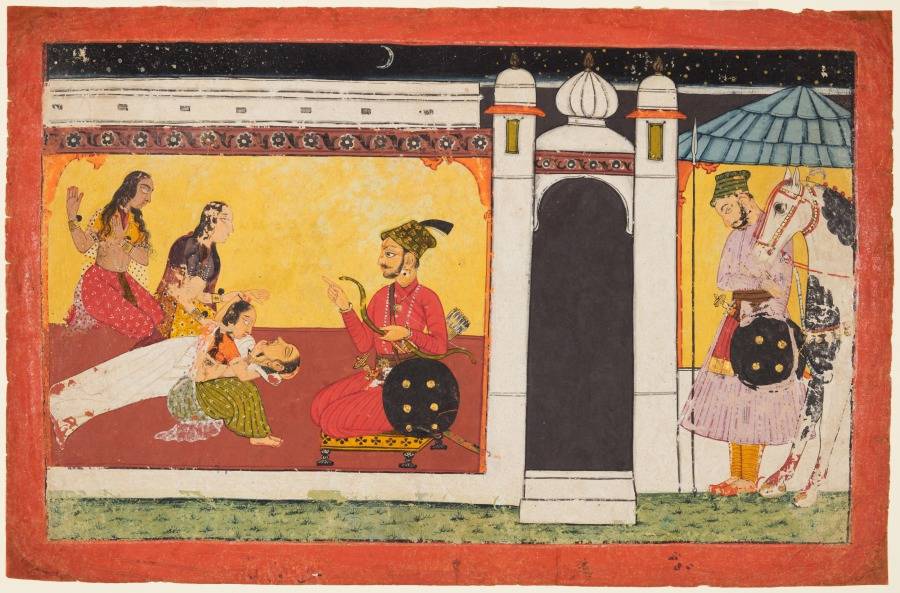 Kandala Dies on Hearing the News of Madhava's Death, ca. 1720

There are so many email newslet­ters now!

It used to feel cozy; a little neighborhood. But now, thanks almost entirely to the efforts of the company called Substack, newsletter-ing has become the enticing next step for a whole host of writers.

I was just reading Patrick Tanguay’s thoughts about adding chunkier projects to his long-running Sentiers newsletter — which is excellent—and, in his post, he mentioned an approach that I want to emphasize and sharpen.

Here’s my piece of advice for newsletter-ers, new and aspiring:

A personal email newsletter ought to be divided into seasons, just like a TV show.

By “personal” I don’t mean “diaristic” but rather “produced almost entirely by one writer, in order to pursue some interest and/or establish a small business.”

Here’s what you get from the nomenclature, the metaphor, of the “season”:

When do you break between seasons? Anytime! When life gets weird. When you’re feeling burnt out. When you sense a new obsession taking shape. When you want to bring in a guest writer. When it’s raining outside. Really: anytime.

Dan Hon was the first newsletter-er I saw to use this nomenclature. I am not 100% sure he is its originator, but that would not be surprising, given Dan’s crackling recom­bi­nant energy. His newsletter is all the way to season 8 now! Some of those seasons have been long, others short, and the gaps between them have been variable, too: many months, a few days.

But that’s all secondary to this, the metaphor’s most precious gift:

Now, partic­u­larly if you’re beginning a paid newsletter with dreams that it will one day provide most of your income, “stopping” is the last thing on your mind. “I’ll send this email newsletter to a happy, engaged audience who will pay me $200,000 every year, forever!” You won’t — not forever. The fact that it feels so strange, even unpleasant, to contem­plate an ending before you’ve even begun — before you’ve enjoyed the tiniest sip of success — is precisely why it’s important to do so.

Let me offer some specific examples.

The first is my year-long newsletter from 2019, which was titled Year of the Meteor. It was launched with an expi­ra­tion date, and I swear to you, that ticking clock was like a power source: a lump of uranium decaying, spraying off energy. I mailed an edition every Sunday, always with the week number incre­mented in the subject line. Everyone knew the denominator; it felt like a progress bar.

The expi­ra­tion date wasn’t even binding! I could easily have said, at the conclu­sion of that year, “What a terrific project! Let’s do it again. It’s time for a new newsletter; welcome to the Year of the — ” whatever. I don’t think anyone would have been unhappy about that. And, if they were: what a conve­nient moment to step off the carousel. “Well, I liked the first season, but after that, the plot got a bit silly … ”

In fact, I did start a fresh newsletter later in 2020, chronicling the devel­op­ment of a simple video game. The pandemic broke the project’s back. I haven’t given up on it, buuut, I’ve been too busy with other work to add a single line of code in months, so, that newsletter sits now in suspended animation.

The crispness of my Year of the Meteor was the exception. In practice, basically every email newsletter runs like my dev diary:

I will tell you — anyone has, who’s been through this cycle — it feels bad to have a channel out there, inert but never closed. If it takes a tiny bit of forethought, some cautionary design, to hedge against that bummer, it’s worth it.

Seasons aren’t right for every newsletter. My regular dispatch to readers—which I’ve been sending consis­tently for ten years?? — doesn’t use that nomenclature, because its editions are so spaced-out and irregular that each is effec­tively a season of one. Maybe, instead of a TV show, it’s a languorous sequence of arthouse movies …

Anyway, that’s my advice. Closing out, I’ll address a few potential objec­tions to sending a newsletter with “seasons”:

Do you think it’s “cute” when a dark, gleaming HBO show produced by ultra-professionals arrives in modular, graspable seasons? Come on.

If the popular and prof­itable video game Fortnite can swipe the term “season” for its evolving releases, so can you. I think it is well on its way toward a totally generalized, cross-media definition.

My newsletter isn’t going to evolve and change that much.

Maybe it should! But, okay: Frasier didn’t evolve and change that much, and it still had seasons. Turns out, they provide a conve­nient, comfort­able scaf­folding for any kind of ongoing creative work. If nothing else, a season implies a premiere and a finale; don’t those sound like fun newslet­ters to write?

(If everybody starts doing it:) Everybody is doing it.

That didn’t stop you from starting an email newsletter ;)