One of the people we lost in 2012 was Jim Naughton. He had an outsized influence on me, and I wanted to take a moment, before the year was over, to tell you about one of his great virtues.

It was one of the greatest virtues a person can have.

Jim was a reporter and an editor, hugely respected in both roles. You can read about his life over at the New York Times—the newspaper for which he covered pres­i­dents Nixon, Ford, and Carter. If you do, you’ll get a sense of the lore surrounding him. Or, as a shortcut, just look at the photo the Times chose to illus­trate the obituary: 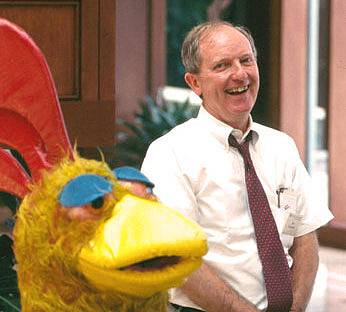 To be precise: he wore the mask, and a matching chicken suit, to a pres­i­den­tial press conference. While working for the New York Times.

The lore, as you might already have surmised, is all about Jim as prankster-professional. Trickster-in-chief. It’s good lore — any of us would be lucky to have that kind of lore! — but I always wondered if it was a bit overdone. Like when people find out you like dolphins, so every year for your birthday, you get dolphin T-shirts, dolphin mugs, plush dolphin toys.

I want to tell you about another one of Jim’s qualities, because I think it was more important than his pranksterism, and because it’s one I’ve thought about a lot in the ten years since I met him.

Something amazing happened when you came into Jim Naughton’s orbit. From what felt like the first moment of encounter, he was on your side. And not passively; fiercely. He was suddenly your cheerleader, your press secretary, the newly-elected president of your fan club. He was your champion — but why? How? You were nobody. Fresh out of college. You hadn’t accom­plished anything. I mean, seriously: not a damn thing.

It was like a physics experiment: Jim’s support was an effect without a cause. It was the prime mover.

There’s a word for this.

That word is grace.

Grace: when you move through the world believing the best about people at all times. Jim’s beliefs became self-fulfilling prophecies, because he told people these things he believed about them — great things, improb­able things — and they in turn believed him. (You wouldn’t think so, but it requires tremen­dous courage to tell people great things about themselves, partic­u­larly in private. Amplified accolades at retire­ment dinners are easy; whispered appraisals across the desk divider are not.)

You could call it a low bar; I call it an open door. The fact that Jim’s support was so plentiful, so available, made its fierce­ness and dura­bility even more remarkable. Basically, it made you feel like you’d won the lottery just by ending up, by chance, in the same room as him.

What a thing, to make people feel that way.

Jim Naughton died in 2012, at the age of 73. He left behind a beautiful family, a set of insti­tu­tions enriched by his contributions, and a whole host of people who now believe improb­able things about themselves.