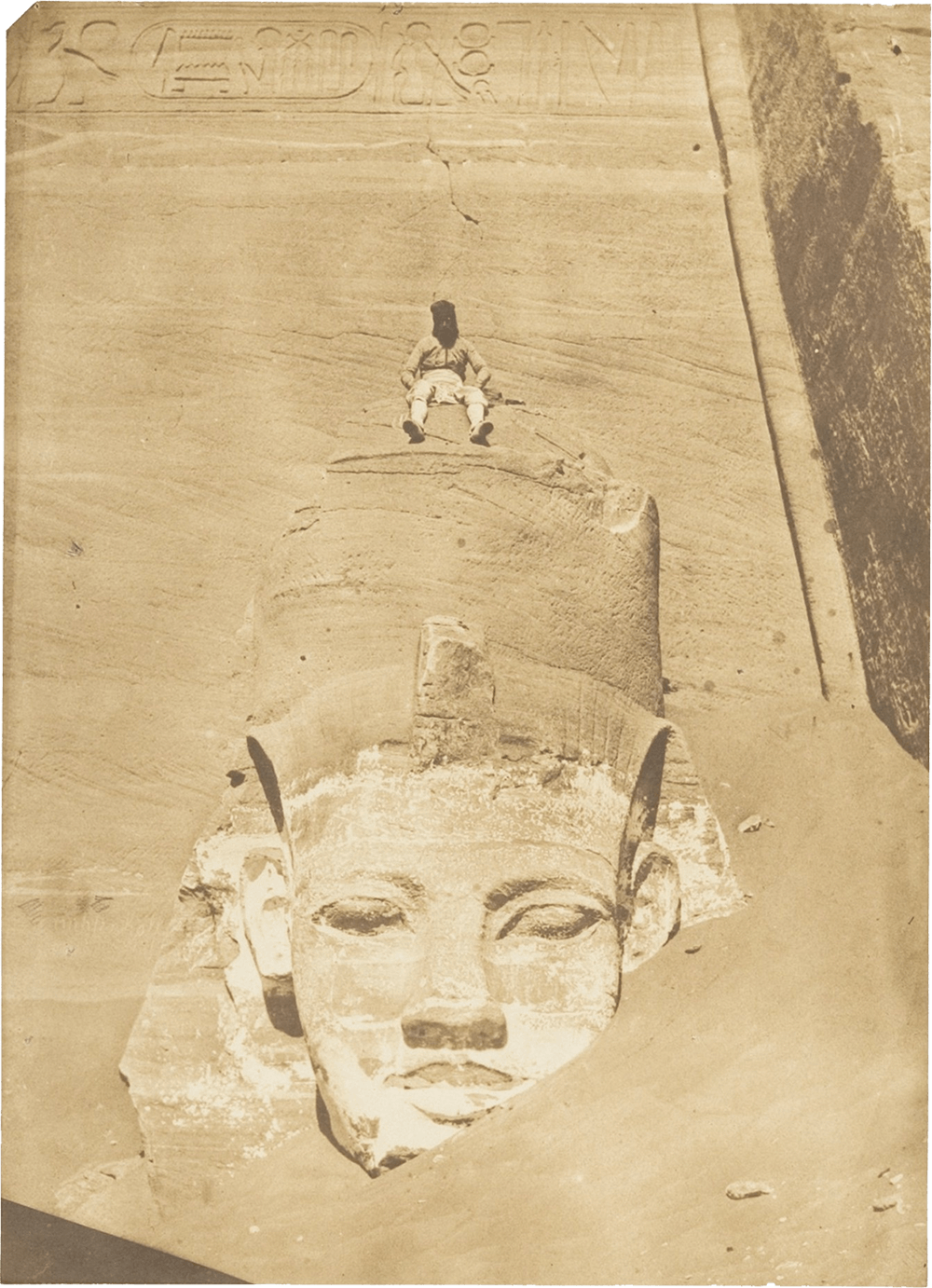 Westernmost Colossus of the Temple of Re, 1850, Maxime Du Camp

I encourage you to press the play but­ton below, then con­tinue read­ing. Later, you’ll find another ver­sion of this piece, trans­formed by con­tri­bu­tions from dozens of other people.

(Alas! Your browser didn't run the JavaScript that was supposed to generate musical notation here.)

Its ori­gin is a mystery. Composer, performer, record­ing: all unknown. The year of its cre­ation is unknown. All we know is how it sounds: stately and nostalgic.

And we know where it played, at least once.

Monitoring a radio sta­tion in New York City, the com­poser William Basin­ski hears the melody, records it. He intends to use a frag­ment as a loop in an avant-garde music project. The tape goes into a box. It is the 1980s.

It is decades later: the sum­mer of 2001. Dig­i­tiz­ing a room full of for­got­ten material, Basinski finds this loop again. But the tape is old; as it moves through the player, it starts to come apart, the mag­netic medium peel­ing off its plas­tic backing, more and more with each repetition. Enthralled, Basin­ski keeps record­ing as the melody dis­in­te­grates before his eyes, his ears.

Standing on his rooftop in Brooklyn, Basin­ski watches the World Trade Cen­ter collapse. It is Sep­tem­ber 11, 2001. Suddenly, the sum­mer’s record­ings have a meaning, a purpose. He titles them The Dis­in­te­gra­tion Loops and offers them as an elegy for the dead. They are heart­break­ing and, before long, beloved.

Seated inside the Metropol­i­tan Museum of Art’s iconic Tem­ple of Dendur, the Word­less Music Orches­tra performs Maxim Moston’s arrangement of the first reel of The Dis­in­te­gra­tion Loops. After the last note sounds, the audi­ence sits for two full minutes in silence, then bursts into applause. It is Sep­tem­ber 11, 2011.

Listening to NPR, I hear this performance. I save the MP3 (forty minutes long!) and return to it often. It is my pri­mary expe­ri­ence of The Dis­in­te­gra­tion Loops. I truly love it.

Years later, work­ing in my media lab, I feed NPR’s record­ing into a neural net­work — a rough AI. The com­puter struggles; it doesn’t know any­thing about notes or scales, horns or drums, tape loops or memo­r­ial concerts — only samples, the stand­alone grains of dig­i­tal sound. But, in its struggle, I hear some­thing evocative: an uncertainty, a brokenness, that seems to match the mythos of Basin­ski’s piece. It is the sum­mer of 2019.

As the network churns, I ask it to generate short pieces, hun­dreds of them. For several months, this is my morn­ing ritual: wake up, make coffee, and lis­ten to the pieces the network has gen­er­ated overnight, reject­ing most, sav­ing one or two. From that curated col­lection, I select about a dozen and sequence them using Able­ton Live. I use sev­eral plu­g­ins to process and mas­ter the sequenced piece, mind­ful not to smooth over the crunch and hiss that is the neural net­work’s signature, and then I publish it.

So. This melody, which was played at some point on a real horn — well, maybe it was real; who knows? — has now passed through radio waves and mag­netic tape and dig­i­tal memory, into the mind of an arranger and back out into the phys­i­cal world — an echo in the Tem­ple of Dendur — then through the inter­net and now into a neural net­work. Yet, through all those degra­da­tions and digitizations, resus­ci­ta­tions and transformations — a heck of a flip-flop—it has never suc­cumbed to noise; not all the way.

A stu­dent at the Uni­ver­sity of Vir­ginia transcribed the melody that Basin­ski recorded, and I played it once myself on a mod­u­lar synthesizer. That’s what you’ll hear (or have heard) at the end of this piece: the ini­ti­a­tion of a new loop.

After I published the first ver­sion of this post in April 2020, I invited any­one read­ing to join me by play­ing or singing the melody once through —

(Alas! Your browser didn't run the JavaScript that was supposed to generate musical notation here.)

Listen, and you’ll hear their voices (and syn­the­siz­ers and pianos and guitars — mandolins too) bat­tle the noise, over­match it. In my imagination, each con­tri­bu­tion is a rung in a lad­der out of the pit of con­fu­sion and loss, all of us both (a) car­ry­ing the melody for­ward and (b) being car­ried by it, up towards something new, some­thing whole.