Here is your liberal art!

A few weeks ago, I launched a simple, one-page project: the Library Demand List, which takes the titles on the cur­rent New York Times Best Sell­ers list and scales them by the num­ber of holds on each at a selec­tion of U.S. pub­lic libraries. It’s like look­ing at the list through library-colored glasses.

The project was moti­vated by own curiosity, which emerged from expe­ri­ence; I was late to the Libby bandwagon, but/and now I am firmly aboard.

This is 100% conjecture, but I truly believe the surge in library e-book lend­ing in the U.S.—which pre­dates the pandemic, though of course it accel­er­ated even more in 2020 — is a direct con­se­quence of Libby’s intro­duc­tion in 2017: its invit­ing simplicity, the fact that it really “has no busi­ness being so good”. (I even find its built-in reader totally pleasant!)

If you don’t already know about the back end of these sys­tems, then Dan Cohen’s post about the thicket that is library e-book acquisition is a must-read. Libby abstracts all of that away, which makes for a great user expe­ri­ence, but/and I think it’s impor­tant to under­stand the tan­gle behind the scenes.

As some of you know, I own a decrepit Riso­graph printer; I’ve used it to print MANY dif­fer­ent things, rang­ing from mate­ri­als for Fat Gold to one-page fic­tion zines I mailed out to a few thou­sand peo­ple. A friend recently pur­chased a much newer Riso and it is a revelation: where before I strug­gled to reach “acceptable” with my prints, now “acceptable” is the base­line and I can go from there.

At the same time, the stu­dio ANEMONE has released a Mac app called Spectrolite that’s designed to help peo­ple pro­duce inter­est­ing color sep­a­ra­tions for the Riso. You can do that in Photoshop, but, as with everything in Photoshop, it feels like chip­ping the little piece you want from a glacier of capability. In this app, the lit­tle piece is every­thing. Spec­tro­lite knows about the Riso ink colors exactly, and no other col­ors at all! It’s wonderful.

There’s a sense here of app as home-cooked meal. I can’t imag­ine that Spec­tro­lite has a poten­tial user­base of more than a few thou­sand peo­ple, total — I could be wrong — yet it exists, and it’s slick, and ANEMONE is mak­ing it even better.

I feel like this is a thing that’s totally pos­si­ble and not enough peo­ple realize it.

One of ANEMONE’s prin­ci­pals oper­ates All Well, a cre­ative sewing stu­dio that offers some really terrific-look­ing patterns. I went through a sewing phase a cou­ple of years ago — I made my own travel duf­fel bag, it’s great — and these cozy, boxy cardigans make me want to set up my machine again …

Speaking of two-person cre­ative collaborations: the duo known as Hun­dred Rab­bits has made an e-book of their North Pacific Logbook avail­able for $5. As I wrote back in September,

They recently com­pleted a 51-day tran­sit of the Pacific Ocean, sail­ing from Japan to Canada in a rather small boat, and their log­book makes for grip­ping read­ing. It’s legit­i­mately harrowing — there are some close calls — so I don’t unre­servedly rec­om­mend it to everyone, but if you are up for a real-life adventure, wow. Here it is.

Jennifer Daniel leads the Uni­code Consortium’s emoji subcommittee, and she recently started a newsletter con­nected to that work. It is tran­scen­dently good, both for its close-up view of the emoji-mak­ing process AND for Jen­nifer’s energy and voice. For me, this is 2021’s best new writ­ing, in any genre.

If you’re look­ing for a place to start, this edi­tion is wonderful: a look at the inge­nu­ity behind 2020’s new emoji, which had to fit the con­straints of an unsettled year.

This edi­tion is also great; it gives you a fairly com­pre­hen­sive (and there­fore dizzying) view of the con­sid­er­a­tion required for a tech­nol­ogy that aspires to universality. (It also includes a paean to the Google blobmoji.)

You get the tini­est sense of the den­sity of issues and oppor­tu­ni­ties tan­gled up in emoji design and refinement, and it’s like: HERE IS YOUR LIB­ERAL ART! Language, culture, politics, engineering, philosophy, actual art … every­thing.

Here is a 3D model of elec­tric­ity con­sump­tion in Manchester in the early 1950s: 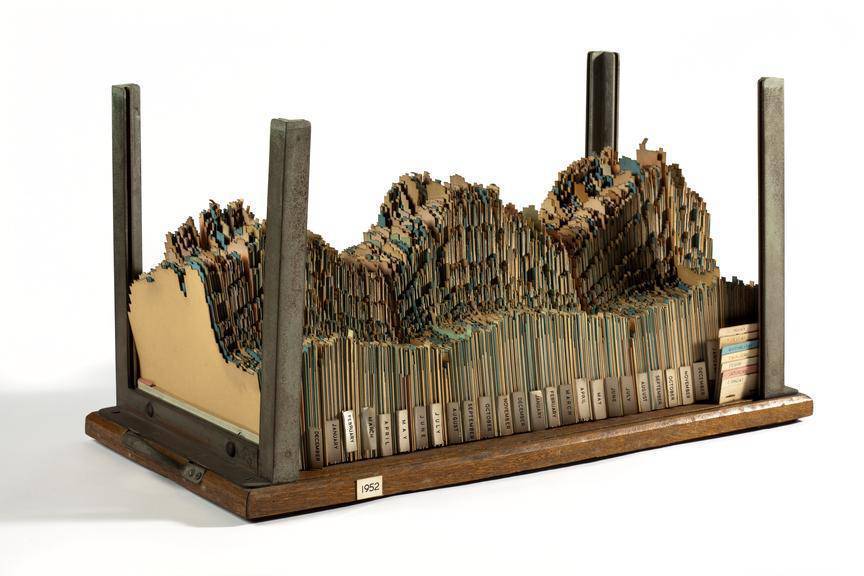 Here are a cou­ple of the con­stituent cards, each the record of a sin­gle day:

This is via Dan Cohen; you might already have deduced that if you enjoy my newsletter, you will also enjoy his.

What a fun col­lec­tion from Golan Levin: shelters as artworks.

Here’s a roundup of science fic­tion writ­ers talk­ing about world-building. Kim Stan­ley Robinson’s view most closely par­al­lels my own:

I don’t like the term world-building. I’d say there’s no such thing — it’s a term out of a vocab­u­lary that grew in writ­ing work­shops to help writ­ers talk about the craft of fic­tion. But the writer should remem­ber that these diag­nos­tic terms are not what the reader feels while read­ing: the reader reads in a kind of dream­like state in which the events of a story really happen. So the writer should focus on some­how for­ward­ing the story. That’s the only imperative: make that “willing sus­pen­sion of disbelief” go into action, and take the reader away.

I wrote this note to myself a while ago and found it again as I was select­ing links for this newsletter:

I truly am not sure what I meant by “sell­ing pizza but never buy­ing beer” but I’m sort of into it?

Following my ini­tial explo­ration of “non-fungible tokens”, which I wrote about for the Media Lab committee, I did a whole lit­tle project cen­tered around the for­mal­iza­tion of an odd kind of poem that depends on lan­guage, code, and luck.

For me, the NFT part ended up being much less inter­est­ing than the poetry part, which is, I think, a good sign.

Here is a won­drous post about real life in Pompeii:

And what we can dis­cover from look­ing at those remains is that despite what’s writ­ten down, the Roman Empire was mostly made up of ser­vice work­ers and slaves who didn’t give a crap about ora­tory and lost Repub­lican values. They just wanted decent jobs — maybe at the baker’s or the tex­tile manufacturer’s warehouse — and a good evening meal at the local taberna.

I like the idea of some video artist read­ing this book backwards, as a guide to producing (beautiful) picture faults.

Andy Matuschak’s reflections on his year as an inde­pen­dent researcher are thought­ful and inspiring.

I think Andy is presently one of the great inves­ti­ga­tors of dig­i­tal media’s poten­tial. In my view, he’s part of an impor­tant intel­lec­tual lin­eage that, though it’s been atten­u­ated at times — now might be one of those times — remains unbroken, con­nect­ing gen­er­a­tions of excel­lent weirdos who insist: we can use these magic mir­rors for some­thing better.

The sec­ond sea­son of Dr. Stone has started!

This is an anime series with an extremely high concept: in its first episode, a mysterious force sweeps across Earth, turn­ing every human into a statue. (Animals are untouched.) Thou­sands of years later, a hand­ful of peo­ple are mys­te­ri­ously returned to fleshly life. The first is the young and bril­liant Dr. Stone, who sur­veys a planet totally rewil­ded and decides, “I am going to reboot civilization … from scratch.” Then, we watch him do it, step by step.

The show is iden­ti­fi­able as part of an anime sub-genre I love, that doesn’t really exist in any other medium: one that lux­u­ri­ates in nerdy, detailed descrip­tions of processes and techniques. Let me expand on this:

Here is one of those beautiful, quixotic toy/game things that can only exist on the web. The top “folder” says universe; just start unfold­ing at ran­dom and you’ll see what I mean. Cosmic. (This is via Matt Webb.)

Look at this short story dispenser that trav­els from library to library!!

A while back, I received a hol­i­day “life update” from a friend, and instead of a card, it was a lit­tle scroll of ther­mal paper, like a long receipt. The update was con­cise but/and beau­ti­fully writ­ten; a plea­sure to read. It was, honestly, the best dis­patch of that kind I’ve ever received, and now I want to copy the format.

I don’t have a Harpers subscription, so I was happy to have this gloss of Mar­tin Scorsese’s recent essay, in which he dis­cusses stream­ing plat­forms, film, and “content”.

A stray thought: the cor­rect 21st-century def­i­n­i­tion of “content” isn’t “generic media” but rather “the spe­cific kind of media designed for platforms and algorithms”. The clue is that “content creators” exist only on (for?) plat­forms.

Another: you know it’s “content” if the form is pro­vided by someone else.

It’s obvi­ous there’s a struggle for lan­guage here, and any­where you find that strug­gle, you know some­thing inter­est­ing is going on …

I’ve been play­ing The Leg­end of Zelda: Breath of the Wild, the gor­geous and med­i­ta­tive Switch game, ver­rry slowly for about a year now. If you’ve ever played the game, or if you’re inter­ested in under­standing how mod­ern video games are imag­ined and developed, you absolutely must watch this pre­sen­ta­tion from Breath of the Wild’s creators at a con­fer­ence sev­eral years ago. It’s charm­ing and sur­pris­ing and unbelievably impressive.

A nice ran­dom inter­net dis­covery: Joep Bev­ing per­forms his song Hang­ing D. Fans of Nils Frahm will like this, I think.

It feels to me like Sat­ur­day Night Live might be entering, or already within, another one of its really good stretches; a deep sense of the absurd has taken root. This segment was my favorite from the most recent episode.

There exists a newsletter, started recently, called 50 Years of Text Games and, why yes, I will sub­scribe to that.

This edi­tion, on the ori­gin of the epochal Adventure — really the first hit video game — was a revelation; the game’s twisty pas­sages were influ­enced by its creators’ direct expe­ri­ence with real spelunking. Some of its set­tings are recog­niz­able as actual por­tions of the Mam­moth Cave sys­tem in Kentucky.

Here at the beginning: the breath of the real across the face of the dig­i­tal waters.

Finally, a selec­tion from the shelves. The siren in the back­ground is, naturally, the Good Book Police on their way over to the lab to con­fis­cate this one:

(Yes, I know they are not footnotes, but endnotes. Comrade … such quib­bling is hardly utopian.)

Thanks for read­ing along with me in this committee. Here on the east­ern edge of San Fran­cisco Bay, we have entered the fair days of spring. I’ve been out and about more — running errands, mak­ing deliveries, and just walking, too. This week, there’s rain on the way. I’m feel­ing busy, a lit­tle bit behind on a lot of things, and happy. Basically: normal.