In a new piece about cli­mate pol­icy, Robin­son Meyer writes:

In fact, Aklin and Milden­berger say, climate change is a distributive-conflict problem—a term that was new to me and that I will now explain. In essence, cli­mate pol­icy restruc­tures the economy, cre­at­ing new eco­nomic win­ners and losers. [Etc.]

I nearly gasped at “a term that was new to me and that I will now explain”. Con­sider a few things:

I think this struck me because it con­nects to a few other impres­sions that have been swirling in my head lately, unat­tached to any hypoth­e­sis or grand formulation; just … swirling. They include:

When a per­son “thinks in public”, I don’t think they are look­ing for imme­di­ate responses; cer­tainly not if those responses “answer the question” and shut down the line of inquiry, but/and maybe not even if they are gen­er­ous and generative. “Yes, and” is great, but, like … let it sit for a minute!

Blogs had comments, of course, some of them as easy to pro­duce as Twitter’s replies. But a blog’s comments sec­tion bloomed in spe­cific response to its subject, its voice; com­ments didn’t (usually?) get pitched in from elsewhere. I don’t know; maybe we can lay Twit­ter’s bad feel­ings along­side all the other wreck­age at the feet of context collapse.

I don’t mean to bask in the imag­ined great­ness of the High Blog­ging Era; for­get about blogs. Rather, I want to reg­is­ter how sur­pris­ing it is that so many of the plat­forms that dom­i­nate the inter­net today are so bad at this; that they so reli­ably push their participants, in ways sub­tle and not, towards know­ing it all. 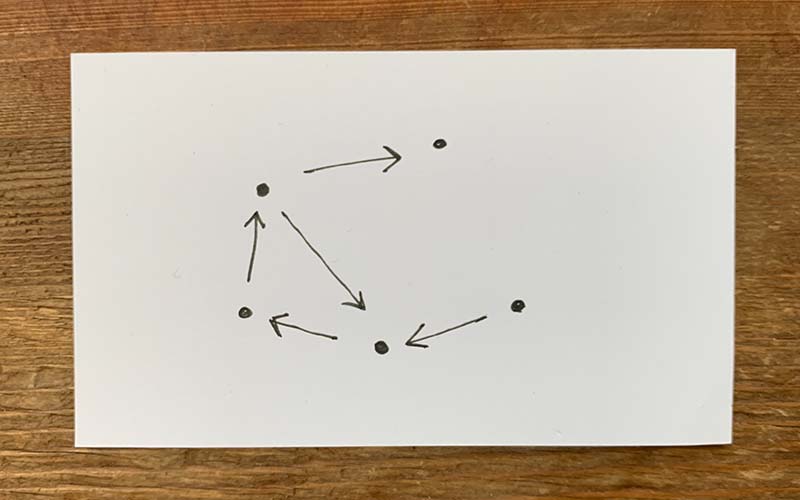 Why did “talking past one another” develop such a bad reputation? Think of how nice it is to have a con­ver­sa­tion walk­ing along­side someone; or in a car, one of you driving, the other in the pas­sen­ger seat. Both of you look­ing outward, prob­a­bly at dif­fer­ent things. Both of your minds roam­ing the same way.

Maybe I want a version of Twit­ter with­out any replies at all; a ver­sion on which only sub­tweets are permitted, a net­work of implications, reformulations, bank shots …

Think, for example, of the book review that item­izes “wot I liked and wot I didn’t” vs. the one that uses the book as a jumping-off point to explore new territory.

Considering where I started — a scrap of lan­guage in a piece about cli­mate pol­icy — this post might itself be an example, for bet­ter and for worse. That’s me at the bot­tom of the sketch, spin­ning up a quick spi­ral before my second coffee.